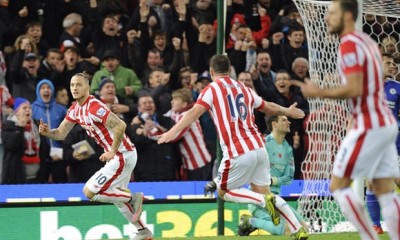 Chelsea have had a dismal 2015/16 season, losing matches on the trot with most of their first-team players out of form. Jose Mourinho was not present with the team as the Portuguese manager served a one-match stadium ban after accepting the FA’s sanction earlier this week.

Chelsea started the game brightly, dominating possession for majority of the first half. Clear cut chances were hard to come by, but the trio of Eden Hazard, Willian and Pedro looked on song right from the go. While Stoke City FC were pushed deep into their own half, Chelsea continued to assert themselves.

Although the half ended scoreless, a well-taken goal from Marko Arnautovic gave Stoke City the lead at the 53rd minute after the Chelsea defence had suffered a lapse in concentration in yet another match. It was an uphill battle for the Blues from that point of time as the Potters parked the proverbial bus and eventually held on for a win.

There were a few moments when Chelsea came close to scoring, with Pedro hitting the post and Eden Hazard’s shot being deflected just wide. At a holistic level, however, Chelsea failed to put sustained pressure on Jack Butland’s goal. The Stoke City keeper looked in trouble when he almost fouled Loic Remy in an attempt to clear the ball. Had Remy chosen to go down, it would have been a clear penalty.

The crowd at Britannia Stadium erupted in raucous cheers when Stoke City sealed the victory. The Chelsea players cut despondent figures though, with the reigning champions’ season unravelling in a dangerous fashion.