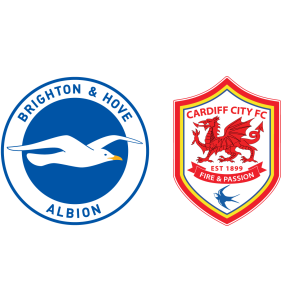 Brighton vs Cardiff – Brighton hosts Cardiff at the Falmer Stadium on 24th January, Thursday in a crucial Championship fixture.

Brighton are second in the Championship standings and one of the strongest contenders for promotion to the top division with fifty seven points after twenty six matches. Cardiff, on the other hand, have had a mediocre season with only thirty three points from nine wins.

Brighton returned to winning ways against Sheffield Wednesday in their last game after a 2-0 loss to Preston in the preceding match but Cardiff come into this game with three consecutive wins under their belt.

Glenn Murray is suspended while Gaetan Bong and Liam Rosenior are sidelined through injuries and lack of match fitness. Anthony Pilkington is a doubt for the visitors.

“I don’t worry about your Brightons and your Readings. And that’s because we’ll give them a good game – are you with me? The pressure’s all on those teams. The pressure was on us on Saturday because we had to win the game. It will be a great crowd (at Brighton) won’t it? And they’ll just expect to beat us, won’t they, really? As will Reading.”

According to Brighton vs Cardiff H2H Stats, the last five matches between these two clubs resulted in four draws and one win for Cardiff City. In fact, the last time Brighton & Hove Albion won a match against Cardiff was back in the 2012/13 Championship season.

Brighton are undefeated in 19 of their last 20 matches in the Championship and are likely to win 2-1 tomorrow.