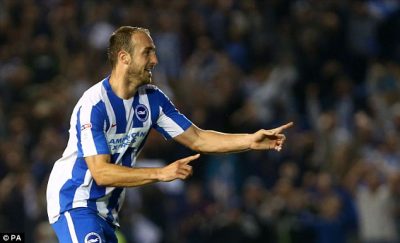 Brighton vs Aston Villa – Brighton hosts Aston Villa at the Falmer Stadium on 19th November, Friday in a crucial Championship fixture. Brighton are three points off the top in the Championship standings with thirty four points after sixteen matches. In spite of being the best defense in the league, Brighton are trailing Newcastle United (who have thirty seven points) on goal difference as well.

With the race for direct promotion to the English Premier League set to go down to the wire, the home game against Aston Villa assumes greater importance. Aston Villa, who were relegated last season, are fourteenth in league standings with twenty one points.

Liam Rosenior and Beram Kayal are sidelined through injuries for Brighton while Kazenga Lua Lua and Richard Towell are yet to regain match fitness. For Aston Villa, Ross McCormack is suspended while Michah Richards and Ritchie de Laet are the long-term injury concerns. Jordan Amavi and Leandro Bacuna are available but Mile Jedinak and Jonathan Kodjia will face late fitness tests.

According to Brighton vs Aston Villa H2H stats, the only previous meeting between these two clubs resulted in a win for Aston Villa. While Aston Villa are undefeated in ten of their last eleven Championship matches, Brighton have won eight of their last ten league games.

Brighton have won their last four Championship matches with a combined scoreline of 9-0 and will be the favorites tomorrow. Aston Villa have recovered their form with three wins in their last five matches but Brighton are likely to win 2-1 tomorrow.