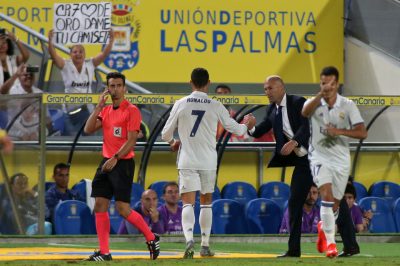 Both clubs won their inaugural matches of the Champions League season – Borussia Dortmund annihilating Legia Warszawa in a 6-0 victory while Real Madrid mounted a second half comeback against Sporting CP to secure a 2-1 win at Santiago Bernabeu.

With both clubs on three points, a superior goal difference has put Borussia Dortmund atop Group F standings.

Cristiano Ronaldo was an unhappy man last weekend after he substituted in the second half of the match against Las Palmas. After replacing the former FIFA Ballon d’Or winner, Real Madrid conceded a late goal and eventually lost two valuable points.

“Dortmund are a good team for me, with an excellent coach and a clear gameplan. We must have a response — to play our own game. I am sure that Dortmund will be very aggressive, playing at home. That is their style of play. Both teams will want possession of the ball, I hope we have it, and we get a good result.”

According to Borussia Dortmund vs Real Madrid H2H stats, the last five clubs have resulted in two draws, two losses and one draw for either side. Borussia Dortmund have won their last three home matches against Real Madrid in all competitions, scoring at least two goals in all those matches.

It should be a closely contested affair but the absence of Casemiro could prove detrimental for Zinedine Zidane’s side. Borussia Dortmund are likely to win by a 2-1 scoreline.