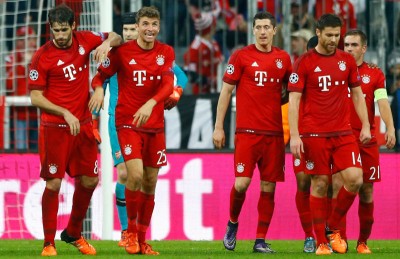 Further analysis shown that Atletico Madrid and Bayern Munich won their last 5 matches in all competitions.

Tiago, Alessio Cerci, Moya, Gimenez and Augusto Fernandez are sidelined through injuries for Atletico Madrid. Gabi and Kevin Gameiro were rested in the weekend although they made substitute appearances. Holger Badstuber and Douglas Costa are Bayern Munich’s only serious injury concerns with Mat Hummels set to face a late fitness test.

“All the brilliant players they have – so they are a very complete squad. It will be very similar to the recent game, collectively and individually they are very important players.

Before there were the organised movements in attack to try and look for numerical superiority. And now they are more direct and using individual brilliance. I see it as just as difficult this way as the other.”

According to Atletico Madrid vs Bayern Munich H2H stats, the last two games between these two sides have resulted in one win apiece. Bayern are undefeated in nine of their last ten matches in the UEFA Champions League, their only defeat coming to Atletico Madrid in last year’s semi-finals which knocked them out of Europe’s premier competition.

It should be a closely contested affair, but Bayern Munich are likely to secure a 2-1 win tonight.