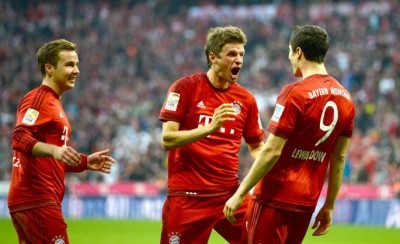 The Bundesliga defending champions Bayern Munich host Hertha Berlin at Allianz Arena on Saturday, 28th November in a bid to increase their lead at the top of the table. Bayern Munich are on 37 points after 12 games while Hertha Berlin are in the fourth position with 23 points.

Franck Ribery, Juan Bernat, Mario Gotze and Thiago Alcantara are sidelined through injuries. David Alaba should recover from his minor injury in time for the game, but Arjen Robben could be rested.

Hertha have their own injury problems with Sami Allagui, Julian Schieber, Peter Pekarik, Niklas Stark and Thomas Kraft already ruled out of the fixture. Anis Ben-Haitra and Mitchell Weiser are listed as doubts for the game.

“It is surprising, but they have developed very well, they have earned the points. Therefore, they are a dangerous opponent. But we only need to look at us and if we play to our level again, there will be only one winner again – that’s us. The eight-point lead we have built up, we definitely want to keep.”

“The players are also eager to make something beautiful. It still has not been managed [to beat Bayern] but that’s not to say we aren’t able to. This is a chance to do something special. I will not let us get too clever, we will just try to play to our limits. We are prepared and will be travelling there to have fun.”