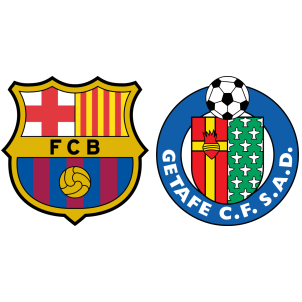 Barcelona vs Getafe – Barcelona hosts Getafe at the El Camp Nou on 11th February, Sunday in an easy La Liga fixture, as they aim to consolidate their position at the top of the league table.

Barcelona sit atop the La Liga standings with fifty-eight points after twenty-two games and are undefeated in the league this season, although they were held to a 1-1 draw by Espanyol in their previous outing.

Getafe are eleventh in the league with twenty-nine points and have played out three consecutive draws against Athletic Bilbao, Sevilla and Leganes in their last three league matches.

Ousmane Dembele is Barcelona’s primary injury concern while Thomas Vermaelen and Andre Gomes are listed as doubts. Getafe will be without the injured Merkel Bergara.

“What we intend to so now is focus on La Liga and the Champions League, where we have a very difficult game ahead. But next up it’s Getafe. My players have the mentality to do what the club demands.”

According to Barcelona vs Getafe H2H Stats, Barcelona have won four and drawn one of their previous five matches against Getafe.

Barcelona have scored at least 2 goals in their last twenty-two home matches in the league, scoring at least twice in their previous eight matches against Getafe in all competitions. Barcelona are in terrific form and would love to continue their momentum, heading into a crucial UEFA Champions League clash against Chelsea in the coming weeks.

A 3-1 win for Barcelona is the most likely result of this game.