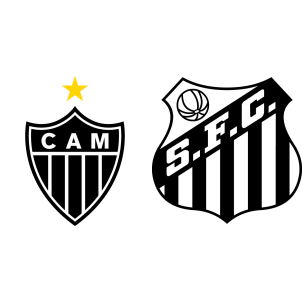 Atletico MG are ninth in the league standings with seventeen points after twelve matches while Santos FC are fourth in the league with twenty points. Both clubs have won three and lost one of their previous six games and are in a similar vein of form – Santos defeated Sau Paulo 3-2 in their last game while Atletico MG managed a 1-1 draw with Botafogo.

The Brasileirao Serie A has been immensely competitive in the last few weeks, although Corinthians have opened up a nine-point lead at the top of the table with thirty-two points from their twelve games.

Lucas Candido, Felipe Santana, Alex Silva, Carlos Cesar and Frickson Erazo are sidelined through injuries while the visitors will be without the suspended Lucas Lima and Jonathan Copete and the injured Luiz Felipe, Gustavo Henrique, Zeca, Ricardo Oliveira and Vitor Brueno.

According to Atletico MG vs Santos FC H2H Stats, Atletico Mineiro have won three and lost two of their previous six matches against Santos FC.

With both clubs in good form but struggling with injuries, it will be a closely contested affair. Atletico are undefeated in their last five league games and are likey to play a 1-1 draw against Santos FC.