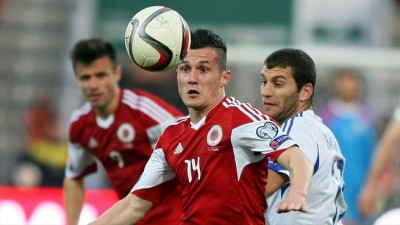 It will be a competitive debut at the UEFA Euro 2016 finals for the small country in South-eastern Europe who turned a lot of heads when they qualified for Europe’s premiere international competition. Albania, who were one of the small horses when the qualifying campaign started a little less than two years back, could prove to be one of the dark horses of this year’s competition.

Albania finished runners-up to Portugal in Group I, but they began their qualification in a spectacular process when a second half goal from Bekim Balaj stunned the Portuguese fans as Cristiano Ronaldo’s side slumped to a 1-0 defeat in the first qualifier. In spite of the stutter towards the end of the qualifiers (one draw and two losses in the last three matches), a good string of results during the early phase helped Albania to 14 points, two points ahead of Denmark to directly send them through to the tournament.

For all the stories of the underdog’s triumph it generated, Albania’s historic qualification was far from being controversy-free. A crowd situation during their match against Serbia as a drone carrying Albanian flag flew over the Partizan Stadium in Belgrade forced the two nations to appeal to the Court of Arbitration for Sport where the Eagles’ appeal was granted and Albania received crucial three points.

“We’re playing the host nation, who are one of the favourites to win the whole competition. There is also Switzerland and Romania – two very strong teams.

Our advantage is that there’s no pressure on us, so everything we do will be an achievement. This is a very important experience for us, and we’ll try to show that because the players are proud to be taking part in this edition of the European Championship.”

Albania, drawn into Group A, will begin their Euro 2016 campaign against Switzerland in an intriguing play of origins – with a number of Swiss-born players in their ranks taking on opponents who have a number of Albanian speakers in their squad. The Albanian first-team regulars are important aspects of Swiss clubs like FC Basel and FC Zurich.

Although Albania’s record against their Group A opponents has been less than favorable in recent past, Gianni De Biasi hopes his side will bring on the spark of technical brilliance which set them apart during the qualifiers. Temperament and nerves are bound to play a crucial role, but Albania has enough talent to write a story like Algeria did in the 2014 FIFA World Cup.

The Albanian squad is a right mix of youth and experience. The defense led by skipper Lorik Cana is the backbone of the side with the 32-year-old boasting of valuable experience of the stadiums in France courtesy his current stint with FC Nantes. The experienced campaigner, known for his excellent reading of the play and no-nonsense, tough-tackling approach will be the key to Albania’s chances this summer.

The inexperienced forward line is definitely the point of weakness with there being only six international goals between Armando Sadiku, Sokol Cikalleshi and Bekim Balaj. However, the recent call-up of Rey Manaj, the talented youngster who has drawn comparisons to Zlatan Ibrahimovic is a beacon of hope for the Albanian supporters.

Albania may find it difficult to replicate the success of their qualifying campaign during the Euro 2016 finals, but they do have the capability to pull off isolated wins during the group stage.