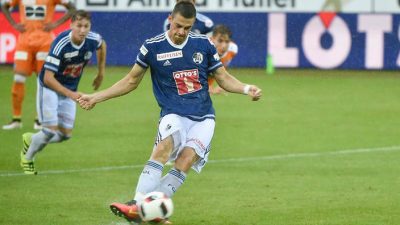 Sassuolo takes on Luzern in the second leg of the third round UEFA Europa League qualifier at Stadio Citta del Tricolore on 4th August, Thursday. The first leg in Switzerland ended in a 1-1 draw after a 42nd minute Berardi penalty cancelled out the early lead Luzern had taken through Schneuwli.

Sassuolo played the most crucial match in their club’s history when they faced the Swiss club with only a small base of travelling supporters and could create history should they manage to progress to the Europa League group stages.

Sassuolo’s rise through the ranks of Italian football has been an inspiring story over the last decade as the club turned around from its financial troubles during the early millennium to become one of the mainstays of Serie A.

Neither teams have any notable absentees due to injury or suspensions. Tomi Juric, Luzern’s latest requisition could play a key role as the forward hit the ground running with a brace on his debut against the Grasshoppers in the Swiss League.

“It will definitely be an important match because it would allow us to continue this dream. It would be good because we have had a year like last year, where we sweated blood in order to play these matches. We hope we have worked well this week and to show what we have done with the boss out on the pitch.”

“It’s not every day you get play Europa League games for your club. It’s exciting for the club … there’s a lot of expectations against Sassuolo. We know it will be hard as they have the away goal but we are going there with full confidence.”

According to Head-2-Head statistics, the only match played between these two clubs ended in a draw. Sassuolo are likely to go through with a 0-0 draw being the most probable outcome for this game.