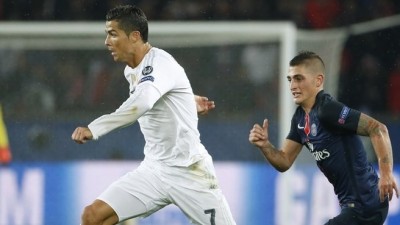 Real Madrid will host Paris Saint-Germain at Santiago Bernabeu on Tuesday, 3rd November in a Group A encounter of the UEFA Champions League. With both sides failing to score at Parc de Princes on Matchday 3, the clubs will play for a result in Spain. Paris Saint-Germain are tied with Real Madrid at the top of the table with seven points, the Parisians leading the Madridistas on goal difference, but it would be a tough tie for Laurent Blanc and his men, to usurp Rafael Benitez’s side at the fortress that is Bernabeu.

Daniel Carvajal has not turned out for Real Madrid ever since he injured his ankle in the beginning of October. Pepe (muscular problem), James Rodríguez (thigh) and Gareth Bale (calf) are doubtful  as well.

David Luiz is doubtful for this particular fixture, having sustained an injury on international break. The Brazilian, along with Marco Veratti are a booking away from incurring suspension.

Real Madrid are unbeaten in their last seventeen matches (with eleven wins and six draws) in all competitions, their last loss coming at the hands of Juventus in last season’s UEFA Champions League semi-finals. Also, the Los Blancos have conceded on only four occasions in thirteen games this season.

Paris Saint-Germain are formidable opponents, the Ligue 1 leaders being unbeaten this season in all competitions, winning fourteen and drawing three of their seventeen fixtures. Edinson Cavani has been in exceptional form and the match would offer an interesting sub-plot with Angel di Maria returning to theplay against the club which he helped win the UEFA Champions League a couple of seasons back.

According to Head-2-Head statistics, the two club met for the first time in twenty years at Paris. Paris Saint-Germain have twice knocked out Real Madrid from Europe in 1992/93 UEFA Cup quarter-finals and 1993/94 European Cup Winner’s Cup quarter-finals and Rafael Benitez’s side would hope to avoid a repeat of history.

On current form, Real Madrid look unstoppable while Paris Saint-Germain have edged out results even when they have been less convincing. Real Madrid are the favourites at home, with 1-0 being the most probable scoreline.