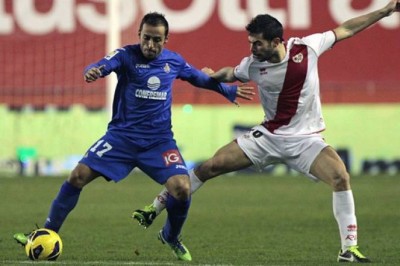 Rayo Vallecano hosts Getafe at Estadio de Vallecas on 1st April, Friday in a crucial La Liga encounter which could decide the ongoing relegation battle in Spain’s top division. The hosts are on the seventeenth position in the league standings with twenty eight points after thirty matches.

Getafe, who have accumulated a similar number of points, are on the eighteenth position courtesy an inferior goal difference and one lesser win than their opponents tomorrow.

David Cobeno, Patrick Ebert, Tono and Jozabed are sidelined through injuries for Rayo Vallecano. Adrian Embarba and Ze Castro are suspended. Piti has been listed as a doubt.

Emiliano Velazquez is Getafe’s only serious injury concern while Vigaray is doubtful for this match.

According to Head-2-Head statistics, the previous six encounters between these two sides have resulted in three wins for Rayo Vallecano and two wins for Getafe. Rayo Vallecano have not won any of their last seven matches in the league while Getafe’s winless streak has been continuing for ten consecutive games.

Both sides are in dire need of points to stay in the top flight and it should be a closely contested affair. On current form, a 1-0 win for Rayo Vallecano is the most likely outcome for this match.