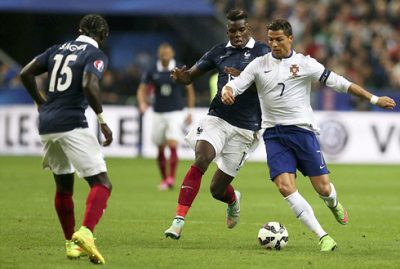 The UEFA Euro 2016 has reached its pinnacle as France take on Portugal at Stade de France in Saint-Denis on 10th July, Sunday in the final. These encounter comes sixteen years after their previous match in Brussels and thirty two years since their first meeting in this competition.

The hosts defeated Germany 2-0 courtesy a brace from Antoine Griezmann to make it to their first major tournament final since the 2006 FIFA World Cup. Portugal had beaten Wales by a similar scoreline a day ago, firmly crushing all doubts that the Cristiano Ronaldo-led side did not belong to the elite group which made it to the last four of the European championships.

Portugal have an uphill battle as according to Head-2-Head statistics, they have won only five of the twenty four matches played so far between this two sides. The last time these two sides met in a competition was the 2006 FIFA World Cup when France won 1-0.

France and Portugal have faced each other in the European Championships only on two prior occasions, in 1984 and 2000, both of which matches ended in a 1-1 stalemate after normal time. France won in extra time on both occasions, Michel Platini sealing the victory in 1984 and Zinedine Zidane sixteen years later.

Pepe, who cheered his team from the sidelines during the semi-final, is once again doubtful for the final and will have to undergo a fitness test. Portugal’s primary concern will be to keep the dynamic attacking quartet of France, led by Antoine Griezmann from getting a whiff at the goal. France, meanwhile, will have to deal with the humongous expectations from their supporters as the likes of Paul Pogba, Dimitri Payet and Blaise Matuidi close in on their first major international honour.

While Cristiano Ronaldo’s bullet header calmed nerves during the semi-final fixture against Wales, Portugal have struggled to score for most of the tournament, drawing their previous five matches. However, Portugal’s temperament and recent experience of winning in extra time and on penalties could hand them a serious advantage, should France fail to win in after ninety minutes.

The betting odds heavily favor a France win with the odds for a Portugal win being at 4.75. With consistent performance all through the competition and steadily soaring performance as the Euro progressed, only a moment of individual brilliance or dire misfortune could keep France from winning their third major tournament on home soil.

“We know the whole country is behind us, so we’re giving everything for them. I’m absolutely delighted and very proud. There’s still one match to go to finish with a flourish – it’s going to be very tricky but I hope this won’t be the end. It’s our duty to win matches for the French public and let’s hope we can finish on a high.”