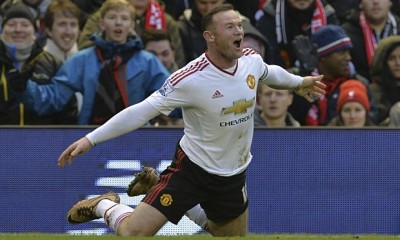 Manchester United pulled off a crucial win over Liverpool when Wayne Rooney’s late goal helped Louis van Gaal’s side to a 1-0 victory over their arch rivals. The United captain’s goal at the 78th minute came against the run of play.

The win takes Manchester United to 37 points on the English Premier League standings while Liverpool remain on 31 points. The visitors had been dominated upon by Jurgen Klopp’s side for majority of the ninety minutes. A depleted backline forced Van Gaal to field Ashley Young at left-back but the Englishman went off with a serious-looking injury in the first half itself.

It was a measured first half from both sides but Liverpool threatened more of the two teams. Manchester United hardly ever worried Simon Mignolet before Rooney’s late breakthrough. Such was United’s lack of product in the final third that they registered a single shot on target in the entire match – a statistic which did not dissuade the ‘boring’ chants from the traveling support.

Roberto Firmino started up front for Liverpool but was not as accurate as he was against Arsenal in the midweek. Liverpool went close a few times with David de Gea making some exceptional saves, especially in the second half but Henderson and co. ended up paying for their poor finishing as the Kops could not take advantage of the fifteen shots the registered.

“I am very pleased with the second half because Liverpool were, in the first half, the team that dominated and we had to survive. In the second half, we showed our way of playing and we can score out of every situation.”