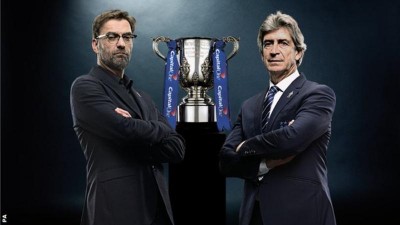 The final of the 2015/16 Capital One Cup will see Liverpool take on Manchester City at the new Wembley Stadium in London on 28th February, Sunday. It will be a glorious opportunity for both sides to win a silverware – their chances in other competitions being very slim.

Liverpool defeated Stoke City in the semi-finals with 1-0 wins in both legs, while Manchester City reversed a first leg 2-1 loss against Everton with a 3-1 win in the second leg.

Adam Lallana (calf), Joe Allen (hamstring) and Martin Skrtel (also hamstring) are all back in training for Liverpool but are unlikely to feature in the starting eleven. Centre-back Dejan Lovren has recovered from illness as well.

“Manchester City will be fit. We will be fit. It is a final and no-one cares where you played your last game.  You can be sure we will have a plan but it is not allowed to go with exactly the same plan in a completely different game.

If I think about it I have a few nice pictures in my mind of after the game at Wembley, being together with our fans and a real reason to celebrate together with no doubts about why we do that.”

“I am training really hard. You train hard. But when you don’t play every week the pressure is even more when you are called up. It’s not difficult for me though. Do I deserve to play? It could be but I have been thinking about this game for a long time since we won [the semi-final] against Everton. It’s a big team in front of us now and we are ready to do well… now is the best moment for us to play a final and we hope to achieve something.”

This will be Liverpool’s twelfth League Cup final, a record for the competition. Of the previous eleven, they’ve lifted the trophy eight times – between 1981 and 2012 – most recently against Cardiff on penalties. Manchester City have been in four previous League Cup finals, winning in 1970, 1976 and most recently in 2014 against Sunderland. They were runners-up in 1974, losing to Wolves.

The match is likely to go into extra time, with a 2-1 result in favor of Manchester City being the most likely outcome.