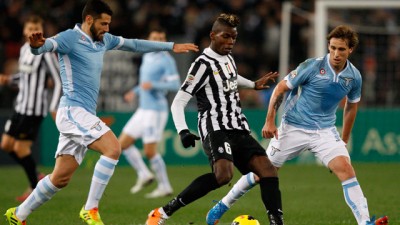 Lazio will host Juventus at Stadio Olimpico on 20th January, Wednesday in the quarter-finals of the Coppa Italia. Last season’s finalists meet this year two rounds earlier in a mouthwatering midweek clash at Rome.

Juventus defeated Lazio 2-1 in the finals of this competition last year and will start as favorites tomorrow having gone on a ten-match winning run after their disastrous start to the season.

Lazio will be without Federico Marchetii, Dusan Basta, Santiago Gentiletti, Ricardo Kishna, Ravel Morrison and Stefan de Vrij. Senad Lulic returned to the first team during the weekend and promptly got onto the scoresheet against Bologna.

Andrea Barzagli, Roberto Pereyra and Mario Lemina are sidelined through injuries for Juventus while Mario Mandzukic and Alvaro Morata are doubtful and will face late fitness tests.

“Wednesday will be a difficult match. Juventus come in off the back of a 10-game winning streak and are in exceptional form. It will be very complicated, the Bianconeri are always a tough opponent for us. [They are] a great team, but not unbeatable.”

“We are playing very well, we are in great form but we still haven’t achieved anything, we mustn’t let up. We have to make sure that we keep this run going. We have so many important games coming up, beginning of course with Lazio and Roma [in Serie A]. We are feeling great and enjoying our football.”

According to Head-2-Head statistics, Juventus have won 51% of their encounters with Lazio and are likely to win tomorrow by a scoreline of 2-0.