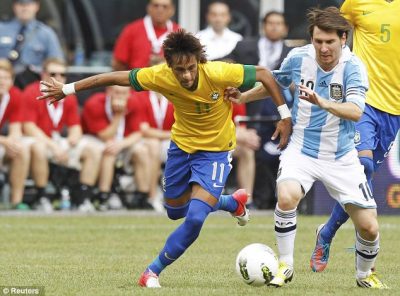 Brazil vs Argentina – Brazil hosts Argentina at the Mineirao Stadium in Bela Horizonte on 10th November, Thursday in a crucial 2018 FIFA World Cup Qualifier for the CONMEBOL nations.

From the ten CONMEBOL association members, four will directly qualify for the 2018 World Cup which is set to be held in Russia, while the fifth-placed nation will advance to the inter-confederation play-offs.

Brazil lead the standings at the halfway stage, with twenty one points from their six wins and three draws, their only loss coming against Chile away from home. Argentina, on the contrary, have struggled to get going and are in the sixth position with sixteen points from their four wins in ten matches.

Lionel Messi’s fitness is key for the Argentina camp, who need to start picking up points soon. Sergio Aguero and Gonzalo Higuain are expected to feature as well with Edgardo Bauza in desperate search for goals across the field.

“There is no such thing as being scared in football. There is respect for Messi and for Argentina. And they feel the same about our players, our team.”

“We must try to earn the points now and beating Brazil would give us the confidence we need. This is a great chance to earn three points and return to the top.”

According to Brazil vs Argentina H2H stats, the last five matches between these two clubs have resulted in two wins for either side and a solitary draw. The last time the Albiceleste defeated the Selecao in a competitive fixture was during the 2006 FIFA World Cup qualifiers.

A 2-1 win for Brazil is the most likely result.