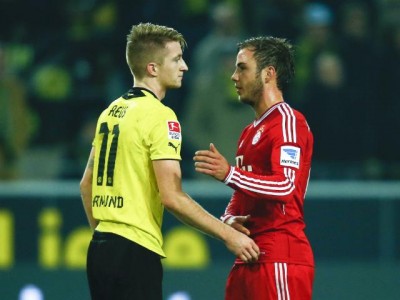 Borussia Dortmund hosts Bayern Munich at Westfalenstadion, Dortmund, Nordrhein-Westfalen on 5th March, Saturday in their twenty-fifth Bundesliga fixture of the season. With Bayern Munich’s surprise loss to Mainz 05 in their previous league match, a win for Dortmund tomorrow could make the title race interesting in the final phase of the season.

Only five points separate the two clubs – Bayern Munich have accumulated sixty two points from their twenty wins so far while Borussia Dortmund are on fifty seven points courtesy their eighteen wins.

Sokratis is the only injury concern for Borussia Dortmund. Bayern Munich will be without Jerome Boateng, Holger Badstuber and Javi Martinez.

According to Head-2-Head statistics, the previous six encounters between these two clubs have resulted in four wins for Bayern Munich and two wins for Borussia Dortmund. Borussia Dortmund have won their last seven home games in the league, keeping a clean sheet in five of those games.

Dortmund have also scored a minimum of two goals in fourteen of their previous fifteen home league fixtures. On the other hand, Bayern Munich are undefeated in eleven of their last twelve matches in the Bundesliga.

It should be a closely contested affair, with a 2-2 draw being the most probable result.