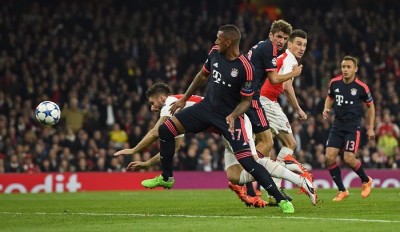 Bayern Munich hosts Darmstadt at the Allianz Arena on 20th February, Saturday for their twenty-second Bundesliga fixture of the season. Bayern Munich sit atop the Bundesliga standings with fifty six points from eighteen wins, eight points ahead of the second placed Borussia Dortmund.

The German giants have all but sealed the Bundesliga title and the thirteenth-placed Darmstadt are unlikely to be a tough challenge for the Bavarian side. Darmstadt have won only six matches so far and are on twenty four points, only four points above the relegation zone.

Jerome Boateng, Holger Badstuber, Javi Martinez and Sven Ulreich will miss the game through injuries. Mehdi Benatia is expected to return to the matchday squad but faces a late fitness test.

Darmstadt will be without five of their first-choice eleven due to suspensions followed by accumulation of yellow cards, a list which includes Konstantin Rausch, Peter Niemeyer, Jerome Gondorf, Aytac Sulu and Marcel Heller.

According to Head-2-Head statistics, Bayern Munich have won all of the previous six meetings between these two sides. Bayern have also kept a clean sheet in their last five games in the Bundesliga.

The Bavarian side are expected to win comfortably against the much depleted Darmstadt and a 3-0 result in favor of the home side is the most likely outcome.