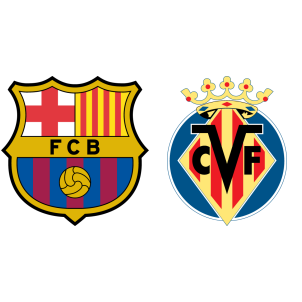 Barcelona vs Villarreal – Barcelona hosts Villarreal at the El Camp Nou on 6th May, Saturday in a La Liga fixture which could get them closer to the championship triumph.

Barcelona currently sit atop the La Liga standings with eighty-one points from thirty five matches, ahead of Real Madrid on goal difference, although Zinedine Zidane’s side has played one lesser game.

Real Madrid have a difficult fixture schedule going into the last few weeks of the season but Barcelona need to win all of their matches to ensure maximum possibility of defending the league title.

Villarreal, fifth in the league standings with sixty-three points, are unlikely to catch the fourth-placed Sevilla but are fighting for UEFA Europa League qualification alongside Athletic Bilbao and Real Sociedad, both of which clubs are on sixty-two points.

Aleix Vidal and Rafinha are sidelined through injuries for Barcelona. The visitors will be without the injured Sergio Asenjo, Denis Cheryshev and Victor Ruiz.

“Villarreal are a team that present many difficulties in defence as they position themselves so well. At the same time, they create very dangerous precisions and are one of the toughest teams in La Liga.”

According to Barcelona vs Villarreal H2H Stats, the last five matches between these two clubs have resulted in two draws and three wins for Barcelona.

Barcelona have won their last ten home matches in the La Liga, scoring at least three goals in the previous six home games. A 3-1 win for Barcelona is the most probable outcome of this game.

This platform has given me a competitive field for which I can exercise my skill against many punters. This empowers me on decisions to call. It's a fairly fun endeavor. Kudos soccer punter.