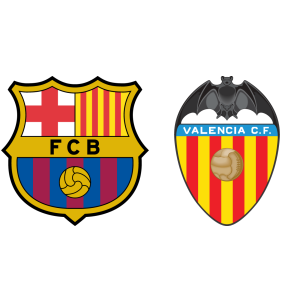 Barcelona vs Valencia – Barcelona hosts Valencia at the El Camp Nou on 1st February, Thursday in the first leg of their Copa Del Rey finals.

Barcelona comfortably sit atop the La Liga standings with fifty-seven points while Valencia are third with forty points. Not only have Barcelona all but secured yet another La Liga, they are the favorites for the Copa del Rey as well.

Valencia had to rely on penalties to defeat Alaves in the previous round while Barcelona relied on a 2-0 home win over Espanyol to progress to the semi-finals. Barcelona had beaten Real Murcia and Celta de Vigo in the earlier rounds while Valencia overcame Real Zaragoza and Las Palmas prior to the quarter-finals.

Ousmane Dembele is injured for Barcelona while Jeison Murillo, Gabriel Paulista and Goncalo Guedes are listed as doubts for Valencia.

“It won’t be like the last time, a 7-0 is not normal for a first game. Valencia were in a delicate position then, but now they have a team that is good enough to win any match.

They’re a rival with very fast strikers and wingers, and the distance between the lines are short. A classic 4-4-2 formation is simple and well-worked, and they are counter-attack specialists.”

A 2-0 win for Barcelona is the most probable outcome.