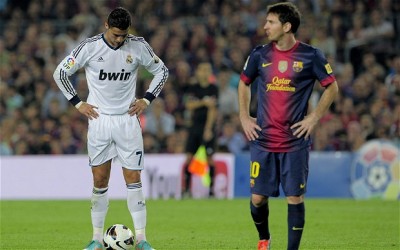 Atletico Madrid crashed out of the La Liga title race after Diego Simeone’s side lost 2-1 to Levante on Sunday evening. The La Liga title race has been a three-way campaign in the last few weeks, courtesy Barcelona’s sudden loss of form in March and exceptional performances from the two Madrid-based clubs.

Before Sunday, the three teams at top were just separated by a point, with the Madrid clubs set to meet each other in the UEFA Champions League final as well. Barcelona won 5-0 against local rivals Espanyol while Real Madrid enjoyed a close 3-2 win against Valencia.

Real Madrid have performed brilliantly on all fronts ever since Zinedine Zidane took charge at Bernabeau and are unbeaten in the La Liga so far in this calendar year, winning eleven consecutive matches.

The Galacticos are on eighty seven points, only one point behind league leaders Barcelona. Atletico Madrid, who remained on eighty five points after their surprise loss to Levante, have been eliminated from the title race with Barcelona boasting of a much superior goal difference in the event of both Real Madrid and Barcelona losing their final matches and Atletico Madrid winning against Celta de Vigo.

Barcelona and Real Madrid both will be playing away in their final league match of the season – Luis Enrique’s side at Granada and Real Madrid facing Deportivo La Coruna. On current form and league table, both clubs should be winning comfortably, Barcelona successfully defending their title in such a case.

However, with the race for La Liga springing surprises at every step, fans of both the clubs are optimistic about winning the league championship next weekend.