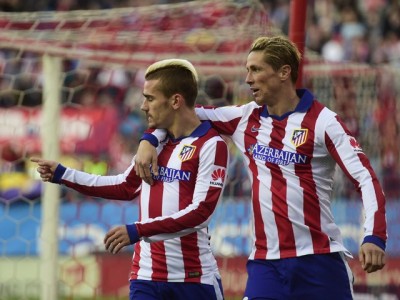 While Diego Simeone’s Atlético have reached the last four for the second time in three years, Bayern Munich are appearing at this stage for the fifth season in a row.

Diego Godin joins Tiago (a broken leg) with a hamstring injury on the sidelines, while Fernando Torres returns from suspension. Holger Badstuber and Arjen Robben are Bayern Munich’s major injury concerns while Jerome Boateng is facing a late fitness test.

To add to the excitement of the punters, bet365 are having the In-Play Bet Offer. Submit a pre-match bet on Atletico Madrid v Bayern Munich and you will enjoy a risk-free In-Play bet to the same stake on the big match.

“The game against Bayern will be as difficult or even more so than the one against Barcelona. They have different weapons but play similar football. We hope it won’t be their night and that we can get a good result.”

Atletico have the best defense in the Spanish Liga. I think they’re a team that play on the break. We need to be careful. We know it will be tough, but we are Bayern.”

According to Head-2-Head statistics, the previous two matches between these two clubs have resulted in one draw and one win for Bayern Munich. Although Pep Guardiola’s side will start the match as favorites, Atletico Madrid’s defense will hold the key to their future in the competition and a 1-1 stalemate is the most likely result for the first leg.

To qualify for your risk free In-Play bet, simply place a bet before kick-off then, once the game starts, place another bet on any In-Play market.

Where more than one In-Play selection is placed on the same bet slip, the risk free bet will be deemed to be the one which is first on the bet slip. As always, there’ll be plenty to choose from with over 70 In-Play markets available throughout the game including Next Goal, Match Goals, Match Corners, Half-Time Result, Full-Time Result and much more.

With an extensive range of pre-match and In-Play markets and a fantastic In-Play bet offer, you can get great value on your Soccer betting at bet365. The Manchester City v Real Madrid offer will be available to all customers except those residing in Germany, Albania, Armenia, Australia, Belarus, Croatia, Georgia, Kazakhstan, Latvia, Lithuania, Macedonia, Moldova, Russia, Slovenia, Ukraine, Uzbekistan and Vietnam.