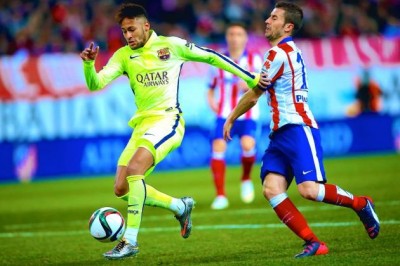 Atletico Madrid hosts Barcelona at Vicente Calderon on 13th April, Wednesday in the second leg of their UEFA Champions League quarter-final tie. With a crucial away goal in their bag and only a solitary goal deficit, Atletico would be hopeful of their chances to progress to the semi-finals of Europe’s premier competition.

The La Liga rivals put up an impressive showing in the first leg with Luis Suarez’s second half brace helping Barcelona secure a comeback win after Fernando Torres put the visitors ahead in the first half. The Spaniard, who has been a thorn in side for Barcelona over the years, was sent off soon after and handed Diego Simeone a tactical dilemma for the second leg.

Tiago is sidelined through an injury for the hosts while Gimenez and Stefan Savic are doubtful. Fernando Torres is suspended. Rafinha, Jeremy Mathieu and Sandro Ramirez are Barcelona’s only injury concerns.

“Being Atlético means being tenacious, competitive, never giving up and overcoming difficulties. We know there are better teams than us. But we know we can compete against Barcelona. The excitement and enthusiasm around this match is fantastic, but I don’t think the Barcelona players will be surprised by the atmosphere because they are used to it.”

“We are treating this like any quarter-final – I don’t feel it’s the biggest match of our season. We have a small advantage and we will try to win here too to make sure of the result. It’s always difficult against Atlético, but it’s all about doing things well, which is what we try to do every match. We’ll need to play really well.”

According to Head-2-Head statistics, Barcelona has won all of the previous seven meetings between these two clubs in all competitions. However, in recent weeks, a dip in form and consequently poor results have plagued the Catalan side, especially on the defensive aspect of their game.

Atletico will be hopeful of their chances and an upset might be on the cards if the Madrid-based club get out of the blocks soon. A 1-1 draw to send Barcelona through to the semi-finals is the most likely result.