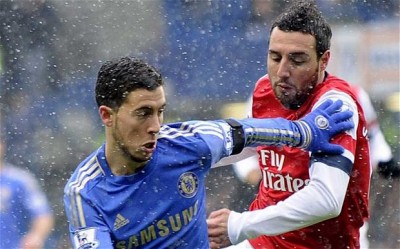 Arsene Wenger comes face to face with his nemesis Jose Mourinho this weekend, as the 1st placed Chelsea travel to the Emirates, the home of the 2nd placed Arsenal in what is dubbed as a showdown for the Premier League title. If Chelsea win at the Emirates, the Blues could clinch their fifth league title at Leicester next week.

Alex Oxlaide-Chamberlain and Per Mertesacker are likely to miss out the match. For Chelsea, the scenario is a little less comfortable. Although Didier Drogba is fit to start, Loic Remy is still uncertain, as is Diego Costa. Jose Mourinho confirmed in his pre-match presser that the final decision on Costa, who has been out with a hamstring problem will be taken prior to kick-off.

Both the teams prefer a 4-2-3-1 formation, although the style of play couldn’t be any more different. While Arsene Wenger wants his team to express themselves at all costs, Jose Mourinho has adopted a more pragmatic approach in the business end of the season.

For the Gunners, Olivier Giroud is definite to start as the frontman, with Alexis Sanchez, Santi Cazorla and Mesut Ozil behind him. For Chelsea, the defensive midfield duo to be employed with the task of containing them will be Nemanja Matic and Kurt Zouma, as they did against Manchester United last week.

Chelsea have won 33% of its matches against Arsenal, according to H2H statistics. Although Arsenal have won their last eight home matches in the league, Chelsea could win this tie by a 2-1 margin.