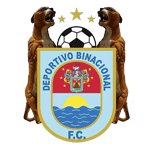 Carlos Alberto Desio is the current coach for Deportivo Binacional.

Deportivo Binacional have played a match in Peru Copa Bicentenario. Their current statistics is 1 draw.

Deportivo Binacional did not lose their last match in the competition.

The overall results is shown by default. You can also analyze Deportivo Binacional results for their home or away matches in Copa Bicentenario 2021.

The graph shows the performance and results of Deportivo Binacional in Copa Bicentenario.

J. Arango is the leading top goal scorer for Deportivo Binacional with 1 goal.