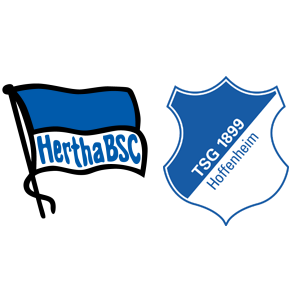 While Bayern Munich have all but locked up the Bundesliga title with sixty two points after twenty-five games, the race is on for qualification for the European competitions next season.

While RasenBallsport Leipzig (forty nine points) and Borussia Dortmund (forty five points) are expected to directly qualify for the UEFA Champions League next season, the fourth-placed Hoffenheim (forty five points) will get to play in the qualifiers for Europe’s premiere competition if they managed to sustain this form.

Hertha Berlin are fifth in the league standings with forty points and are currently in contention for Europa League qualification alongside the sixth-placed FC Koln who are on thirty seven points.

The visitors will be without Lukas Rupp and Mark Uth as they are still recovering from their injuries while Pavel Kaderabek and Kerem Demirbay have resumed training.

According to Hertha Berlin vs Hoffenheim H2H Stats, Hoffenheim have won four of their last five matches against Hertha Berlin. A competitive game between these two clubs have never finished goalless.

While Hertha Berlin have won ten of their previous twelve home games in the league, Hoffenheim are undefeated in twenty three of their last twenty five Bundesliga matches. Hoffenheim defeated Bayer Leverkusen in a 1-0 win in their last game to stretch their unbeaten run to five games but Hertha Berlin were defeated in a high-scoring 4-2 game against FC Koln before the international break.

It should be a closely contested affair with a 2-2 draw being the most likely outcome.