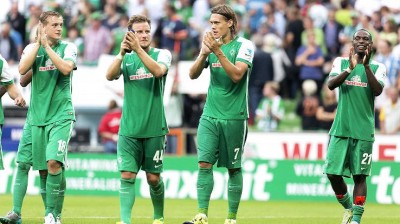 Hamburger SV hosts Werder Bremen at Volksparkstadion on 22nd April, Friday as both clubs aim to stay up in the Bundesliga next season. Hamburger SV are firmly entrenched in a relegation battle having lost four of their last five matches.

Hamburger SV are on the twelfth position with thirty four points while their opponents tomorrow, Werder Bremen are in sixteenth position, qualifying for relegation play-off, with only thirty one points.

While Werder Bremen caused an upset by defeating Wolfsburg 3-2 in the last match, Hamburger lost 3-0 to Borussia Dortmund in their last game.

The lower half of the Bundesliga points table has been a compelte topsy-turvy this season, with only fourteen points separating the bottom seven teams. While Hannover 96 have been all but relegated, any two clubs among Hamburger SV, Hoffenheim, Augsburg, VfB Stuttgart, Werder Bremen or Eintracht Frankfurt could see themselves drop down to the second division.

Ivica Olic and Josip Drmic are sidelined through injuries while Rene Adler is suspended. Nicolai Muller and Pierre-Michel Lasogga are listed as doubts as well. Werder Bremen will be without Raffael Wolf, Aron Johannsson and Philipp Bargfrede.

According to Head-2-Head statistics, the previous six encounters between these two clubs have resulted in three wins for either side. Considering their current form, a 1-1 draw is the most probable outcome.