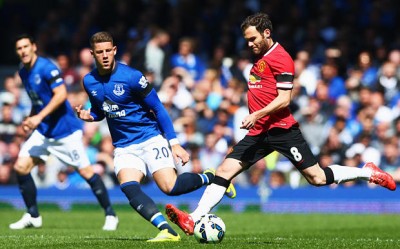 Everton comes face to face with Manchester United on 23rd April, Saturday for the semi-finals of the FA Cup at the New Wembley Stadium, London. The twelfth FA Cup meeting between these two clubs, this season’s semi-final of the world’s oldest domestic cup competition might play a crucial role in the futures of both the managers at the helm.

While Louis van Gaal has had to cope with speculations of sacking for most parts of the season, Everton has struggled since their FA Cup quarter-final win against Chelsea and rumors have grown stronger that Roberto Martinez’s time at the Goodison Park is running out.

Gareth Barry joined Tyias Browning and Seamus Coleman on the sidelines when he picked up a groin injury during Everton’s 4-0 defeat to Liverpool. Ramiro Funes Mori is suspended. With John Stones and Tonny Hibbert yet to regain match fitness, Roberto Martinez clearly has a selection issue at the back.

“We carry hurt and that’s normal after what happened in the last game, but clearly the focus is about the opportunity of being in the semi-final of the FA Cup. At the moment everything is about the semi-final and everything is about taking our football club to Wembley with a really strong feeling of being together, of facing adversity in an exemplary way and being as good as we can in front of a very strong opposition.”

“It it not for me to judge [the importance of this match] – I have said that already in former press conferences. I do my utmost best and I have said that. We are in the semi-finals of the FA Cup, we are still in the race for the fourth position in the Premier League and that was our aim.”

According to Head-2-Head statistics, Everton have won six and lost five of their twelve FA Cup matches against Manchester United, winning the last two encounters. However, on current form, Manchester United are likely to progress to the finals with 2-1 scoreline being the most probable result.