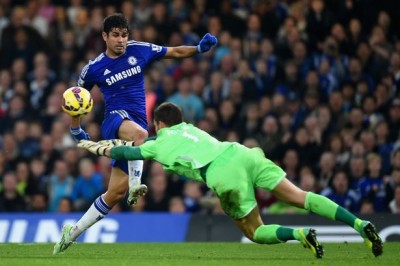 Chelsea registered a 3-0 win over Crystal Palace as they kicked off their 2016 with style in the English Premier League. The defending champions started on the backfoot as a depleted Palace side probed and prodded for the first goal of the game.

Although Crystal Palace created chances through Puncheon and Campbell in the early phase of the game, the Chelsea backline held strong, especially Kurt Zouma and Cesar Azpilicueta displaying a top notch performance.

The tide turned in Chelsea’s favor when Oscar tapped in Chelsea’s first goal of the night after Cesc Fabregas had found Diego Costa with a well-measured through pass and the centre forward disabled the Palace defence with a cleverly disguised low cross.

Willian doubled the lead in the second half with a goal which reflected Chelsea’s technical brilliance as well as his individual shooting prowess. The third goal would come off Diego Costa to seal Palace’s fate and hand Chelsea a comfortable win for the first time in months.

“We’ve been involved in every game until the last moments this season but not today. Chelsea were very good. A lot of their stars turned up. Their mentality has changed – you can see that.”

Alan Pardew admitted his side were no match for Chelsea tonight, while Guus Hiddink explained his tactical ideology which provoked a change in fortunes for the Chelsea side.

“If the team hasn’t been doing well for a long period then it is important to look for security. That’s why we emphasised on good, hard work in a tactical defensive way. I don’t like to see a team drop back very far and seek false security but to look forward and get the ball forward as soon as possible.”

Chelsea now move up to the fourteenth position with twenty three points as English sides across all tiers prepare for the third round of the FA Cup next week.