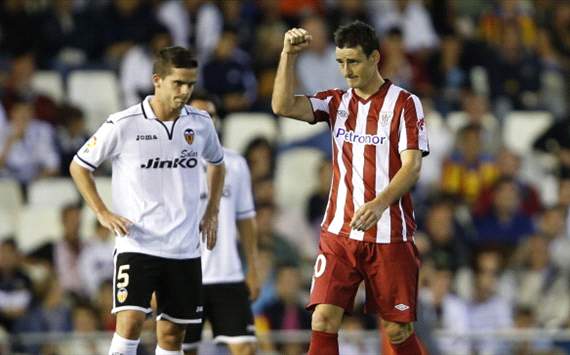 Athletic Club Bilbao host Valencia CF at San Mamés Barria in a midweek fixture this Thursday. While Nuno’s side attempts to claim the final UEFA Champions League berth, the Basque club will love to get back to winning ways after a 2-0 loss against Sevilla last weekend.

Ernesto Valvedre will miss a number of key players. Iker Muniain has been ruled out for six months after an anterior cruciate ligament tear in the match against Sevilla. Ander Itturapse has been ruled out as well, with an adductor muscle injury. Defender Aymeric Laporte is suspended. The Los Che will be without captain Daniel Parejo who has to serve a one-game suspension. Enzo Perez is still recuperating from his injury and Jose Gaya has been listed as doubtful.

Athletic is expected to line up in a 4-2-3-1 with Gomez, Benat and Williams forming the band of attacking midfielders ahead of Mikel Rico and Mikel San Jose, and behind Aritz Aduriz. Carlos Gurpegi will fill in for the youngster Laporte at the heart of the Bilbao defensive unit.

Valencia will most definitely line up in a 4-3-3 and Alvaro Negredo is likely to start up front. Portuguese midfielder Andre Gomes is the expected choice to replace Parejo in the middle of the park.

Although the fourth-placed Valencia sit 22 points ahead of the eighth-placed Athletic Bilbao, not much separates the two teams based on current form. While Valencia have remain unbeaten in the last eight matches, Athletic Club Bilbao lost to Sevilla after winning five in a row.

The Basque side held Valencia to a 0-0 draw at Mestalla, back in November. Historically, according to H2H statistic, Valencia have won 46.5% of the matches between both clubs. However, Nuno’s team has not been able to defeat Athletic Club in their previous four La Liga meetings, with the last three ending in draws.

Nuno Espirito Santo, Valencia’s manager spoke at length about how the battle for the final two Champions League spots will go down to the wire with just five points separating Atletico Madrid, Valencia and Sevilla.

“This season more than 70 points are going to be needed to finish in the top four. We are three teams who are fighting for that (Champions League) place and it is going to be a tough battle.

We have to do our job, keep playing the same way because we know that it will be a fight to the finish for a difficult goal. We are motivated, we are on track and working well.“

Valencia may come out on top in this fixture with a 2-1 scoreline, although a close contest is expected.